On the Diminishing Highway Trust Fund 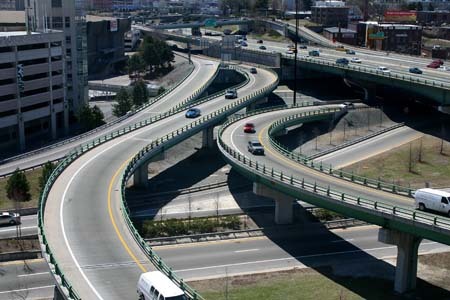 The Highway Trust Fund helps pay for development and maintenance of our infrastructure including highways and bridges. They are running out of money. Spending is increasing but revenue is decreasing.

The main source of income for the fund has been a federal fuel tax. Currently this tax is set at 18.4 cents per gallon for gasoline and 24.4 cents per gallon for diesel. This rate was set in 1993, since then cars have gotten more efficient while the buying power of the American dollar has gone down (18 cents in 1993 would be about 29 cents in 2013) and this is putting serious pressure on the government. It has become necessary for Congress to bail out the fund multiple times, with more than $41 billion being transferred from the general fund to help pay for projects, something that never had to be done before 2008.

But the main issue isn’t the lowered income, it’s the aging interstates. Construction began on the highways in 1956 and the roads were designed to last only 50 years (most of the road was completed in the early 1980s). Increasingly serious maintenance will have to be performed over the next couple years. And, in addition to the roads, bridges are also reaching their expiration dates. Right now 1 in 10 bridges are deemed structurally deficient. This does not necessarily mean that a bridge is unsafe but more maintenance and more intensive inspections will have to be performed to prevent calamities. The bridges were also designed to last 50 years and in ten years 1 in 4 bridges will be 65 years or older.

A solution, in classic American political fashion, has been difficult to agree on. The Obama administration has proposed a plan to tax the $2 trillion dollars stashed overseas by American companies. These companies are required to pay a tax when bringing the money into the US, they retain it overseas to avoid paying. The suggested plan would tax all of this money to get an influx of cash right away but at a lower than normal rate in an attempt to be fair to the companies. This would bring in $240 billion dollars over the next 6 years to the fund. Opposition argues that the plan is unethical, the counter argument is to lower the tax rate for a short period of time and let companies bring that money in voluntarily, motivated by the fact that the rates are lower than normal.

Another popular feeling is that the fuel tax should be adjusted for inflation. The extra revenue would certainly help but it still may not be enough. Vehicles are so fuel efficient nowadays that a better option would be to charge a tax per mile a car is driven (like large trucks pay). This would better reflect how much an individual uses the roads though it would be harder to track.

Whatever it is, somethings got to be done. $3.6 trillion will need to be invested by 2020 to keep the highways in good condition. We live in a time when trust in the government is historically low, we will have to wait to see if our leaders will come through for us.